Ethane is extracted from Natural Gas, comprising from 1-6% of its volume. The majority of the remainder is methane. Ethane is also a by-product of the Petrochemical refining industry. Its primary use is as a feedstock to manufacture ethylene.

Ethylene (aka ethene) is the most manufactured organic chemical on the planet. Looking at its chemical formula, note that is not an “equals sign” in the center. It’s a chemical symbol representing a Carbon-Carbon Double Bond, one of the strongest bonds in all of chemistry.

A carbon atom can make four connections to other atoms because of its valance (the number and position of the electrons it has). Bonding twice or three times with another carbon atom allows the existence of alkenes or alkynes, respectively. The way carbon bonds with itself allows something as hard as a diamond (pure carbon) to exist alongside something as soft as graphite (also pure carbon).

There are five methods by which carbon atoms bond, namely sp, sp2, sp3, sp3 d, and finally, sp3 d2. Each one has slightly different angles which significantly alter strength and the ultimate characteristics of the final substance. This is why carbon is in so much of our chemistry—because of the variety of bonds that it can create.

Once you start adding other elements, such as hydrogen, you can store a lot of energy in a single molecule. Carbon can combine with anything that has an electron (or gap) to share, which is why it plays such an essential role in the majority of our chemistry. It is so important to the existence of life that any chemistry which involves carbon has a distinct name: Organic Chemistry. The remainder is simply called Non-Organic Chemistry.

This substance is produced by the steam cracking technique, where pure ethane is mixed with steam at 750-950°C. This causes a breakdown into smaller components, and the creation of ethylene. Now, unfortunately, it is laden with water which must be removed. This is a job for molecular sieves. 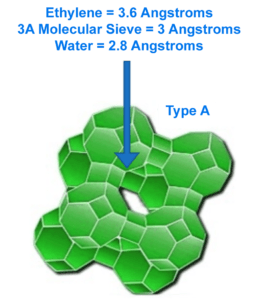 Dehydration of ethylene prepares it for use as a feedstock to make polyethylene, the world’s most popular plastic. Molecular sieves take advantage of the fact that ethylene is 3.6 Angstroms (Å, or ten-billionths of a meter) while the water molecule is about ¾ the size, at 2.8 Å. The microporosity of the molecular sieve allows the water to enter and get trapped by adsorption, while the ethylene passes right by, too big to enter the micropores.

The second stage of the process forces the adsorbed water out of the molecular sieve, either by heat or vacuum, and it is ready to be used again.

The result is dry, dehydrated ethylene. It is now ready to become surfactants for detergents, agricultural gas used to hasten ripening of fruits and vegetables, a welding gas, as an ingredient to make styrene and polyvinyl chloride (PVC), as well as Monoethylene glycol (MEG), used for automotive boil/freezing protection, and the world’s most desirable plastic for containers and barriers, polyethylene.

Of interest is the fact that if ethylene is hydroxylated properly, it becomes ethanol, the sort of non-poisonous alcohol found in liquor.

The demand for ethylene is growing every day as many nations strive for the success of First or Second World nations. Hengye is more than happy to aid and/or expedite this growth for these foreign sales now permitted by trade laws.

Production based on shale-bed fracking brings a massive new supply to market in the United States. Companies will be growing their operations significantly, and will need Hengye technology to process the increased load. Asia will be more than happy to absorb any new production so now is the time to connect with Hengye and make our company your new partner in growth and success.