The Significance of Pore Size 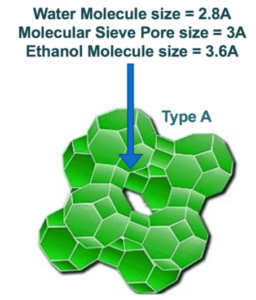 When comparing the actual performance of various Type 3A molecular sieves, it is important to consider the co-adsorption rate. For processes such as Ethanol Production, co-adsorption is an undesirable occurrence and refers to the amount of ethanol that is adsorbed by the molecular sieve along with the water that is intended to be adsorbed. Ethanol is not adsorbed by 3A zeolite because the pore opening of 3A molecular sieve crystals is too small to adsorb ethanol molecules as these molecules measure approximately 3.6 Angstroms in diameter. Water molecules only measure about 2.8 Angstroms in diameter, so the 3 Angstrom pore aperture of Type 3A is ideal for adsorbing water and excluding ethanol, allowing ethanol to pass through to the product stream. Given the diameter of both water and ethanol molecules, a 4A crystal, measuring approximately 4 Angstroms in diameter can adsorb both water and ethanol, so while water is adsorbed, some ethanol will be adsorbed as well.

How Can One Sieve Differ from Another?

Testing in an Operational Ethanol Plant

In Ethanol Production, one of the last, essential production steps is to dehydrate the ethanol to about a ninety-nine percent purity. Achieving such high levels of ethyl-alcohol purity cannot be accomplished by distillation alone because a natural phenomenon occurs, called an azeotrope, which prevents water from further being boiled out of the mixture. This azeotrope forms at about a ninety-four percent ethanol purity, and ethanol this low in purity is not generally considered suitable for use as fuel or as a fuel additive. To further dehydrate the ethanol, Type 3A molecular sieve is applied to the dehydration process. This molecular sieve will selectively remove water most of the remaining water, to create about ninety-nine percent pure ethanol, which will pass through the dehydration beds and along to the product stream.

The Impact of Co-adsorption in Ethanol Production

Co-adsorption of ethanol is a problem for ethanol producers because capacity for water per cycle is decreased when ethanol is adsorbed, which leads to shorter cycle times and lesser volumes of ethanol being produced during the given cycle. Co-adsorption of ethanol also means the regeneration proof will be higher than necessary, which means that more ethanol will be recycled and returned to the rectifier, ultimately decreasing the production capacity per cycle while simultaneously losing efficiency and capacity for future dehydration cycles. This occurrence leads to the reprocessing of the same ethanol repeatedly, instead of sending the ethanol out as dry product. In practice, the purpose of molecular sieve is to remove water from ethanol, and not to recycle ethanol throughout the system. The occurrence of ethanol recycling costs operations money through loss of product, repeated expense of energy, and reduced working capacity of the dehydration units. Although the working capacity and efficiency may only equate to a few gallons per minute, these savings extrapolated to the course of 350 operation days per year can quickly add up to over one million gallons per year. This difference in capacity should be focused to become and increase instead of a loss in production, which will increase the plant’s overall profitability. It is not recommended to choose sieve suppliers based on immediate price alone, ethanol co-adsorption should be deeply considered, along with other factors such as crush strength and adsorption capacity.