For humans, dehydration is a very bad thing, but for Natural Gas (methane), nothing could be better! Natural Gas cannot be overloaded with water vapor because that adds unnecessary weight (mass) and takes up volume, which decreases the efficiency of our transportation methods.

Hydraulic fracturing or “fracking” technology has advanced steadily since the early 2000s. A bed of sedimentary shale is located and a hole is bored (typically to 6,000 meters/3.7 miles). A sharp 90° turn allows the drilling to move horizontally through the shale bed.

At various points along the route, fracking fluid is introduced, which is composed largely of water. It forces open existing cracks (and causes new ones) to allow the trapped natural gas to escape so it can be harvested. Most of the water is recovered, but inevitably some of it ends up as vapor in the natural gas, which must now be removed.

The water vapor, borne along by the natural gas, can condense into a liquid state as it passes through colder sections of the delivery system. This can foul valves and regulators, as well as lead to corrosion and other damage to the system.

In icy conditions, remote control valves can actually be compromised by freezing so they cannot be operated. This means that much larger parts of the system might need to be shut down in the event of an emergency because of too much moisture causing a failed valve.

Fairness for the Consumer

Natural Gas is generally billed to the consumer as a specific volume of fuel multiplied by a constant to offset the slight compression due to the pressurization of the line. This might be 4%, for example, so the local utility multiplies the volume by 1.04 to determine the actual delivered volume of gas at STP (Standard Temperature and Pressure).

Delivering fuel with water impurities can also damage customer equipment. It makes their equipment operate less efficiently and, more importantly, doesn’t deliver the amount of energy that they have paid to receive. 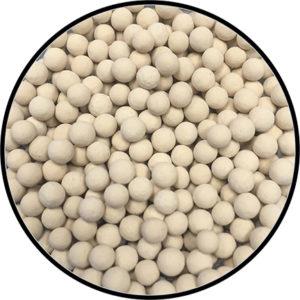 This is where molecular sieves come into the picture. These devices, usually in the form of beds or cylinders of pellets, or beads possess microscopic “holes” sufficiently small to allow water to be adsorbed, while remaining too large for the penetration of methane molecules.

Expressed in angstroms (Å), or ten-billionths of a meter (10-10), this measuring unit is so small that we use it to calculate the wavelength of light. A water molecule is only 2.8 angstroms wide, whereas natural gas is 3.8 angstroms wide. This difference is what allows us to separate the two products.

Best of all, with such a broad difference, the feedstock can be introduced at high pressure, and still retain much of that pressure after it is processed. This makes it ideal for delivery directly to the distributor.

Many gas producers in the U.S. are expanding their operations, and Hengye is in a great position to participate in their growth. With them stepping up production, it means more volume, which demands better, faster, newer equipment in order to stay competitive.

Always on the cutting edge, with the latest molecular technology, Hengye will be here when you need us.