Tail gas can be handled in many different ways, in some cases, it is sent to flare and any remaining sulfur compounds are incinerated. Tail Gas Units (TGUs) can be used to further process the sulfur in tail gas due to environmental and specification requirements, a TGU is used to convert residual COS, CS2, and SO2 found in tail gas into H2S, which is then recycled to sulfur recovery units to be processed again. 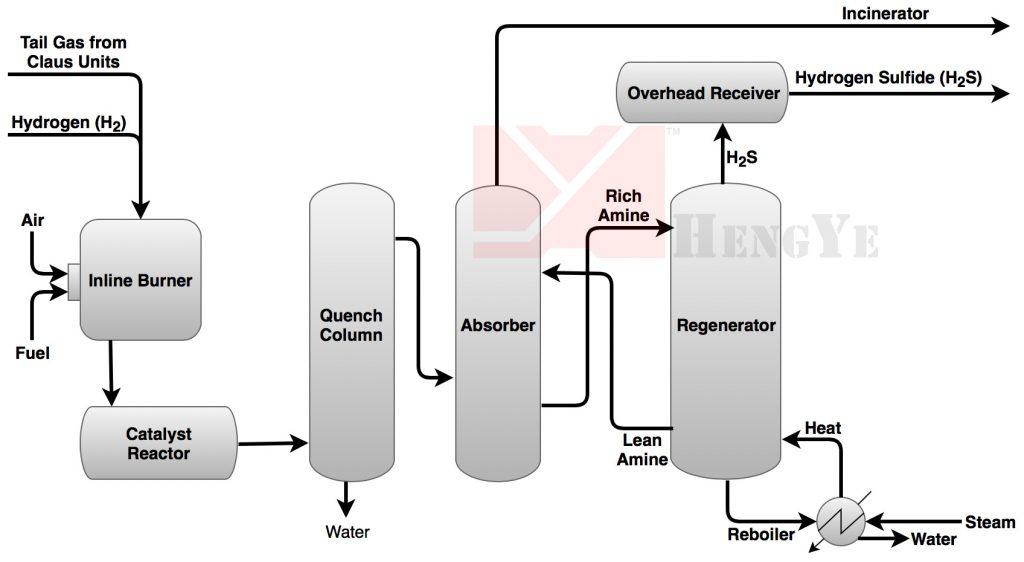 Tail Gas Units reduce the amount of residual sulfurs to help meet environmental regulation. The tail gas from each reactor in the Claus process is mixed together, heated, and then hydrogen is added in the presence of a specialized catalyst, Hydro SulCat, to hydrogenate the sulfur and form H2S. After the hydrogenation reaction has taken place, the effluent is cooled and water vapor is removed, concentrating H2S in vapor phase. The water from the quench column can sent to a sour water stripper or recycled in an upgrader. The hydrogen sulfide and hydrogen that did not react is introduced into a lean amine solution, which produces a sweet gas that can be incinerated in the stack. A special regenerator will use stripping steam to regenerate the rich amine solution, which releases H2S that is then mixed with other hydrogen sulfide isolated in the tail gas unit and recycled as feed gas, back to the Claus Units to undergo the process another time.